The Wildebeest Migration is a unique wildlife event on earth- where more than 2 million wildebeest, gazelles, zebras can be watched as they move through the Serengeti-Masai Mara eco-systems. 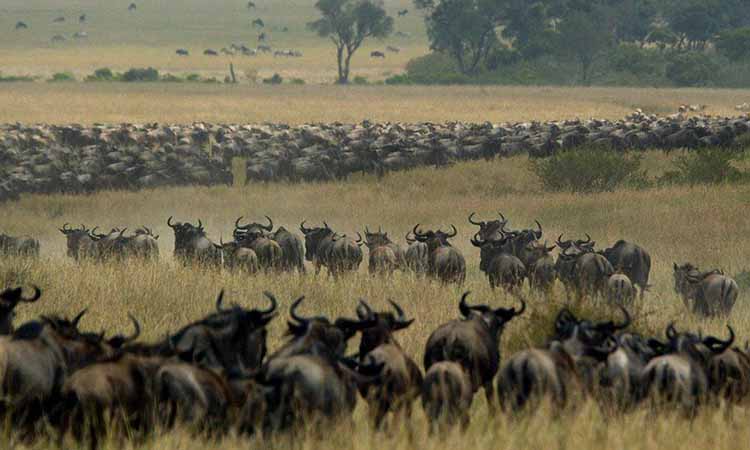 It is truly one of the world’s greatest natural wonders and a must-enjoy wildlife experience on Tanzania safari or Kenya safari.

Why do Wildebeests Migrate?

Wildebeest trek for 800kms in large numbers. The timing of the movement often coincides with greening of grass on the short grass plains during the rainy season.

Such areas are regarded safer and secure from predators the fact that they can be sighted which makes it also the best time for them to birth. The dry plains often force these creatures to migrate to look for greener pasture in the Western corridor.

The Northern extension of the eco-system receives heavy rains though the grass isn’t very nutritious. The dry season, wildebeest return and the south becomes greener again.

This makes the entire wildebeest migration a clockwise movement- from the South, West, North and return to the South.

Wildlife in the Wildebeest Migration

Wildebeest migration is without doubt one of spectacular events that any nature lover shouldn’t miss in life. Watching wildebeest migrate is amazingly such a thrilling experience that always leaves the minds of many travelers blown away.

Wildebeest move in huge numbers roaming up and down in the grassland and cross rivers making it one of the mesmerizing experiences in the wild.

The expected animals to witness during the Wildebeest Migration include wildebeests interesting mammal species and antelope family.

Over 2 million of these engage in the migration and particularly, the Western bearded wildebeests often move between the Serengeti and Masai Mara eco-system.

The Eastern White-bearded wildebeests live in Tanzania and Kenya especially around the Eastern Gregory rift and the blue/brindled wildebeest live in the Southern River Zambezi.

During the Wildebeest Migration, about 250,000 wildebeest lose their lives. They move for long distances and some of them die as a result of exhaustion, thirst, hunger and others end up in the hands of predators. 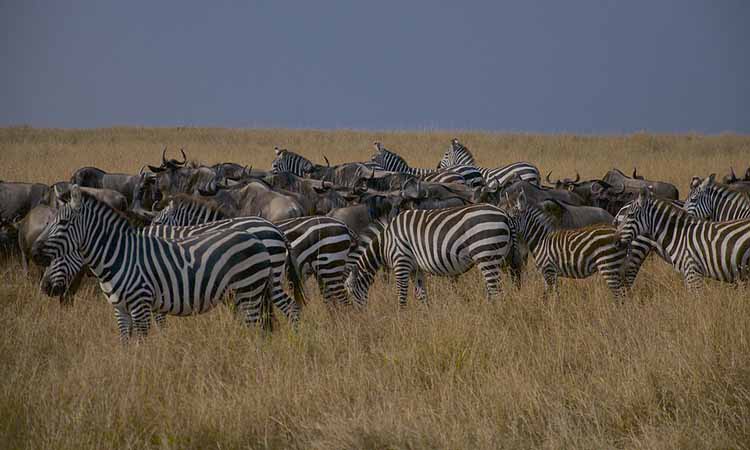 Zebras and other antelope families take part in the Wildebeest Migration. Over 250,000 Burchell’s zebras and more than 300,000 different kinds of antelopes including impalas, the Thompson’s gazelles, Grant’s gazelles, elands can be witnessed accompanying wildebeests.

Predators such as cheetahs, leopards, crocodiles, hyenas are also very active during the Wildebeest Migration.

What Month is the Wildebeest Migration?

The migration often finishes the Southward trek in January of every year and the wildebeest move via the eastern edge of the Serengeti National Park and to the Ngorongoro Conservation Area (NCA).

This is when grass is nutritious making it the best time for wildebeest to birth.

January to February is often referred to as the wildebeest calving season. Large herds of wildebeest assemble in the short grass plains along the lower the Northern slopes of the Ngorongoro Crater highlands and Olduvai Gorge. 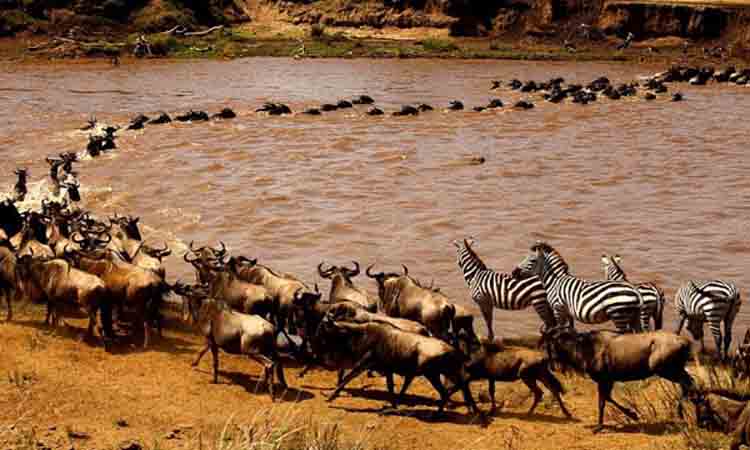 January to February offers remarkable experience of its own as you witness the birthing and dramatic actions of the big cats on the hunt.

April and May Wildebeest Migration

After calving, wildebeest start drifting Northwestwards to the fresher grass in the Central Serengeti, and joined by thousands of zebras and several other small antelope families.

In May, they cover many kilometers as they congregate at the Moru Kopjes near Dunia camp.

The mating season starts around the end of May and throughout the rut, the wildebeest journey continues while they graze. The movement gains momentum gradually and the mass numbers are witnessed in the Western Corridor of Serengeti National Park.

This is period to witness the wildebeest crossing via the Grumeti River though not as powerful as Mara crossings but game viewing is still incredible.

The dry season begins from June and it is when the huge number of wildebeests is witnessed in the Western Serengeti and the Southern banks of the Grumeti River.

Towards the of June to early July, several of wildebeests and zebras proceed to the Western edge of Serengeti National Park. This is the best time to witness the powerful Mara River crossing North of Serengeti. 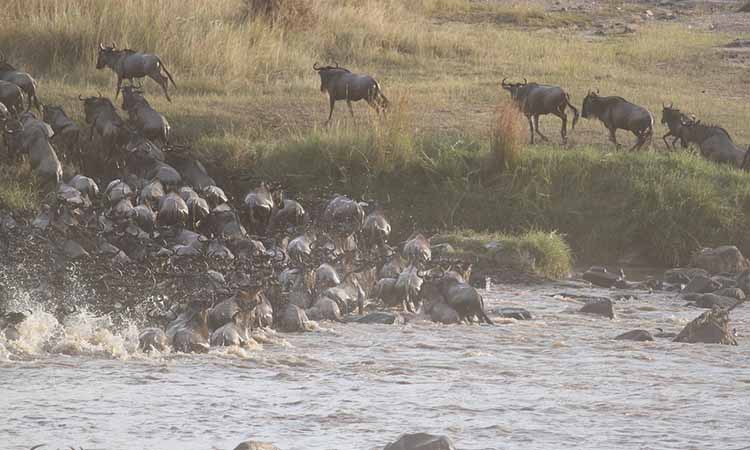 By July, majority of the wildebeest would have successfully crossed the Mara River and seen in the Masai Mara National Reserve in Kenya. During this time, Rekero Camp is the ideal camp to enjoy the River crossing for tourists on Kenya safari.

August is usually when the wildebeest encounter challenges crossing through the Mara River and they spread on the Northern area of the Masai Mara. Most of them also stay back in the Northern Serengeti.

When the rivers are in full flow, there is panic and confusion crossing and the predators also wait to hunt- this is the time when most wildebeest lose their lives. The main drama ends by September and October with migration witnessed taking the eastern side.

October and early November, wildebeest migrate from Kenya Masai Mara to Eastern side of Serengeti via Namiri Plains an ideal spot for watching the cheetahs. They occupy the eastern and southern parts in December then the circle continues. 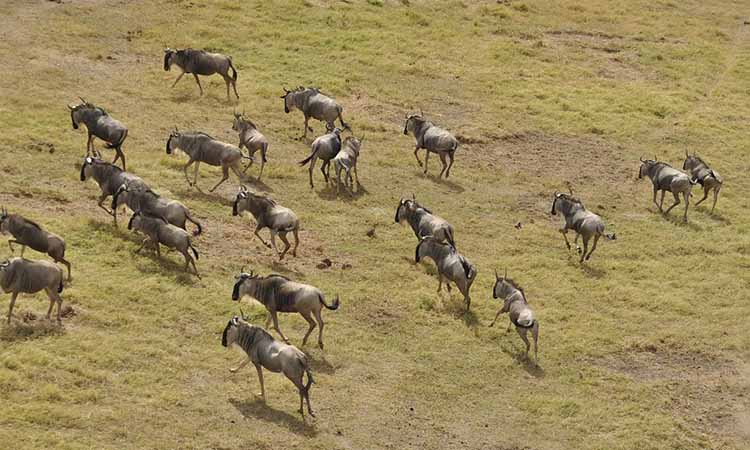 Places to stay on Wildebeest Migration Safari in Tanzania

The 6 Days Tanzania Wildlife Safari is for both wildebeest migration and big five game viewing experience in Tanzania. This Tanzania wildlife safari includes visit to Tanzania’s Northern Safari Circuit destinations such as Serengeti National Park, a 14763sq.kms of land area and a home to all the… View Tour

The 8 Days Luxury Tanzania Safari is a special wildlife safari package designed differently for those you in search for something splendour while visiting Tanzania. What awaits you on this luxury wildlife tour 7nights/8days includes an unforgettable big five game encounter, wildebeest migration experience… View Tour