Akagera national park lies in the eastern part of Rwanda along the Tanzania board in eastern Africa. The park is composed of 1122 square kilometers of lowland Savannah vegetation protecting an African Savannah landscape of acacia and bushes comprising of patches of open grassland and swampy lakes.

The park derives its name after Kagera River which flows along the eastern boundary into Lake Ihema within and around the park, rich in biodiversity and forming a wider protected wetland.

Akagera National Park is regarded as the largest National Park in Rwanda with the only one Savannah wetlands which supports the flora and fauna species together with the larger mammals like lions, buffaloes, giraffes, leopards, bushbucks, Topis, Zebras, with rare African Elephants available to explore on a Rwanda safari tour.

The national park comprises of the rising Mutumba hills (2000m high) showing great magnificent views of the park’s features on your great Rwanda safaris like lakes, rivers, the savannah plains and the swamp wetlands below.

Akagera National park was established in 1934 to protect the primates and the vegetation with initially 2,500 square kilometers, however, as a result of the Rwandan Genocide civil war, the National park was de-gazetted by the local people returning home after the civil war resulting into poaching and cultivations of the land and wildlife species in the park, the national park decreased in size almost half of its original size.

However, in 2009, the Rwanda Development Boards and Africa parks came to establishment and management Agreements in which the Park was to be of importance to both bodies.

It’s one of the largest protected wetlands in Eastern Central Africa. In 2015 some lions from South Africa were introduced in Akagera National park these were the first lions in Rwanda for 15 years.

In 2017, Rwanda reintroduced around 20 Eastern black Rhinoceroses from South Africa. These animals had been absent for a period of 10 years. More than 50 black Rhinos lived in the Savannah-habitat of the park.

The population has declined due to Poaching this was confirmed in 2007 with the amazing reintroduction of black Rhinos and lions, the park is a home to Africa’s Lion, elephants, rhinos, Big five and Buffaloes.

Akagera National Park experiences a relatively moderate to warm, it has a uniform average temperature throughout the year. It has two wet seasons with its’ dry seasons being June and September, short rains are from October to December.

The wet season, the experiences heavy rains in March, April, May with afternoon temperatures of 260c/790F 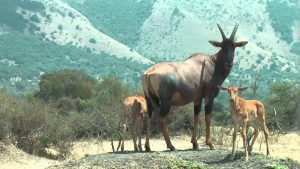 The park has a variety of wildlife species including the big 5 for an amazing big game safari on your Rwanda safari tour like lions, elephants, buffaloes, rhinos, and leopards.

The park contains walk trails which give a path for an opportunity to sight different primates, exotic plants, and water birds at a closure range making a memorable Rwanda safari tour in Rwanda

This boat cruise is on Lake Ihema, Rwanda’s second largest lake which gives you great views of the wildlife at a close range such as the Hippos, water birds, crocodiles among others, the safari creates an interesting and lifetime experience on you Rwanda safari tour thus great memories.

On your Rwanda safari tour possibilities of fishing on Lake, Shakani is high, the activity is done with highly skilled and acknowledgeable guides

This lodge, Akagera Game Lodge is located on a hill south of the Akagera national park overlooking the Savannah plains and Lake Ihema including other smaller lakes like Shikani.

It comprises 60 rooms, a conference center, a restaurant, and a bar. The lodge introduces you to a magnificent view of the Savannah landscape and unforgotten Rwanda safari tour experience

It is located in Kayoza 6 km from the park with facilities like Restaurant, a terrace with mountain views, continental breakfast, and a bar

The lodge is a luxury accommodation with 9 tents widely spaced accommodating 20 people with facilities like en-suite bathrooms, dressing areas, boardwalks, fireplace, solar energy, bar, Restaurant among others. Other lodges include Magashi lodge, Karenge Bushcamp, among others

There flying services to the park such as Akagera Aviation. The service takes a shorter time to the park.