Pian Upe Game Reserve or Wildlife Reserve lies within the remote semi-arid plains of North-eastern Uganda and extends for an area of 2043 square kilometers making it the largest Wildlife Reserve and second-largest Protected Area in the country after Murchison Falls National Park. 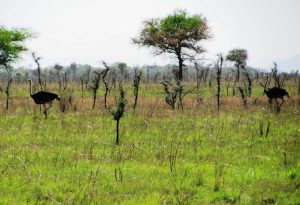 Pian Upe’s vast and unique landscape makes it a home to over 250 unique bird species that include the Somali Ostriches, secretary birds, Fox weaver birds, and many others.

Things/Activities to do in Pian Upe Game Reserve

Game drives with customized 4WD Vehicles through some of the Reserve’s designated game tracks rewards tourists with the views of the rare wildlife species such as zebras, Rothschild giraffes, Roan antelopes, buffaloes, cheetahs, Uganda kobs, elands and waterbucks among others.

Pian Upe Game Reserve is one of Uganda’s endowed birding Paradises with rare species such as the Somali Ostriches only found in two places in the country.

Mountain climbing is another activity organized for tourists who visit Pian Upe Wildlife Reserve. Climbing Mount Kadam is so far the most popular in the area.

Your visit to Pian Upe Wildlife Reserve leads you to an old Cave adjacent to the locals of the area known as “Napendio” Cave. This Cave holds a significant history, given the fact that it used to be a recreational place for art drawings.

Pian Upe Wildlife Reserve can be visited all year round although it is situated within a semi-arid area with one main rainy season that is usually avoided for safaris.

This vast Protected Area is endowed with endless beauty that needs a minimum of two days to explore to ultimate satisfaction.

The drier months of December, January, February, June, July, August, and September are however the best vegetation is shorter making it easier and more interesting to see wildlife around the main water drinking points.

The rainy months of March, April, May, October, and November are avoided because roads, paths and game tracks tend to be muddy and impassable while the vegetation is also taller and thicker hence making wildlife spotting more difficult.

How to get to Pian Upe Wildlife Reserve

Pian Upe Game Reserve is about 8-9 hours’ drive from Kampala City and can be reached through road and air transport. For air transport, flights are organized to the nearest operational airstrip in Amudat then head to the Reserve by road.