Volcanoes National Park is situated in the north-west of Rwanda, about 2 hours’ drive from Kigali City and bordering Mgahinga Gorilla National Park in south-western Uganda as well as Virunga National Park in the eastern Democratic Republic of Congo. This Park extends for an area of 160 square kilometers (16,000 hectares) of rainforest, Bamboo and Volcanoes.

Gazetted in 1925, Volcanoes National Park became the base for Dian Fossey-the American primatologist that dedicated 18 years of her life studying the Mountain gorillas. It is a home to five of the eight Virunga Volcanoes that include Bisoke, Gahinga, Karisimbi, Muhabura and Sabyinyo Volcanoes.

The unique altitude of Volcanoes National Park ranges from 2500 meters to 4500 meters above sea level at the peak of Mount Karisimbi the highest point of the Park. This extraordinary altitude different has greatly influenced the variation in vegetation with montane forest being on the lowest zone, followed by the Neoboutonia forest, Bamboo forest, Hagenia-Hypericum forest, Lobelia wollastonii, Lobelia lanurensis, Senecio erici-rosenii, grassland, secondary thicket, meadows, wetlands, marshes to Lakes. 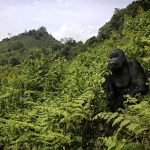 As of 2019, there are 10 habituated gorilla families open for tourism in Volcanoes National Park thus 80 gorilla permits are issued per day by the Rwanda development Board at $1500 per person per trek.

The half hour to 3 hours’ trek usually starts with meeting at the Park Headquarters at 7am for pre-tracking briefing.

Golden monkey tracking is another interesting tourist activity in Volcanoes National Park with two habituated communities tracked daily at $100 per person per trek.

Hikes to the Dian Fossey gravesite are organized daily to allow tourists learn and be introduced to the interesting life of Dian Fossey the American primatologist that spent a good part of her life studying the Mountain gorillas until her life was prematurely ended allegedly by poachers. The two hours’ hike also offers sights and sounds of the other residents of the Park such as birds, primates and elephants among others.

Volcano climbing is another popular tourist activity enjoyed in Volcanoes National Park with tourists hiking Karisimbi, Bisoke and Sabyinyo Volcanoes to be rewarded with the views of the other Virunga Volcanoes, rolling hills and their respective summits.

Cultural tours in Volcanoes National Park are mainly conducted to the nearby Iby’Iwacu Cultural village where entertainment, traditional marriages, traditional food preparation, traditional medicinal preparation and many other interesting cultural activities are organized for tourists.

Unlike gorilla trekking, Dian Fossey gravesite hike and volcano climbing that are usually invigorating and physically demanding, nature walks are easier but reward tourists to a medley of attractions ranging from the birds, trees, butterflies, reptiles, Amphibians to primate species.

Your visit to Volcanoes National Park leads you to the Musanze caves for their beautiful appearance and mysterious history among others.

Visit to the Twin Lakes

Your visit to Volcanoes National Park also involves exploring the stunning Twin Lakes of Bulera and Ruhondo with a boat cruise allowing you to explore its entire beauty.

Volcanoes National Park is one of the few Protected Areas in Africa with wide range of accommodation facilities ranging from budget to luxury to cater for all categories of gorilla trekkers.

Volcanoes National Park can be visited at any time of the year but the dry months of January, February, June, July, August, September and December are the best for trekking Mountain gorillas, golden monkeys, hiking the Dian Fossey gravesite, climbing the Virunga Volcanoes and undertaking other nature walks because since the rains are relatively lower, trails tend to be less slippery. The wet months-March, April, May, October and November that are characterized by muddy and slippery hiking trails. However, birding is perfect during the wet months.

How to Get To Volcanoes National Park

Volcanoes National Park is situated in the northern province of Rwanda in Musanze district and can be reached through air and road transport. For road transport, both private and public means can be used whereby with the latter, buses from Kigali or hire a car for self drive from Gisenyi lasting 2-3 hours’ transfer until Musanze then you are required to hire a cab or motorcycle to the Park headquarters.