If you came across Mountain Gorillas and Lowland Gorillas at the same time while on your gorilla safari, higher chances are that you won’t easily differentiate the 2 apes especially for first time trekkers. Mountain gorillas and lowland gorillas are 2 distinct primate species sharing about 98.3 percent of their genetic DNA with humans thus making them our closest relatives after chimpanzees and the bonobos.

Generally, there are 2 major gorilla species which tourists on gorilla safari usually look out for and they include the eastern gorilla scientifically known as gorilla beringei and the western gorilla also popular as gorilla gorilla. The 2 species are further broken into 2 sub-species of gorillas. For trekkers who have been on gorilla trekking safari, you realize these apes have a lot in common.

The Eastern gorilla is comprised of 2 gorilla sub-species; the Eastern Lowland gorilla and scientifically, these are best referred to as Gorilla beringei graueri. Presently, they are the largest of all the species of gorillas and they exist only in the lowland rain-forests in the Democratic Republic of the Congo (DRC).

Where to see the Eastern lowland gorillas?

Tracking to see these primates in the wild is such a life changing experience any enthusiastic primate lover needs not to miss on gorilla safari in the DR Congo.

You require a valid gorilla permit to track the eastern lowland gorillas in Kahuzi-Biega National Park, each costing US Dollars 450.

Where to see Mountain Gorillas 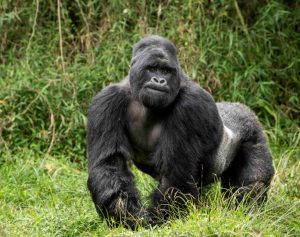 Mountain gorillas are a sub-species of the Eastern gorilla and scientifically, they are referred to as Gorilla beringei beringei. Currently, these rare apes remain fewer than 1063 worldwide.

An hour with a habituated family of mountain gorillas in the wild is of no doubt a life time experience. Majority of visitors on gorilla trekking safari in Africa come to see mountain gorillas.

In Uganda alone, over half of all the 1063 mountain gorillas thrive in Bwindi and Mgahinga Gorilla National Park making it an exceptional mountain gorilla trekking safari destination. Rwanda and DRC share the remaining portion.

Tourists on Uganda gorilla safari can trek anyone of the 21 habituated gorilla group families, 20 of which can be tracked in Bwindi Impenetrable National Park. In Bwindi, gorilla treks are carried out in the 4 main gorilla trekking regions; Buhoma sector in the North, Ruhija in the East and Rushaga and Nkuringo sectors in the south.

In case you have a plan to trek mountain gorillas in Uganda, gorilla permits are issued out at 700 US Dollars if you are foreign non-resident, US Dollars 700 for foreign residents and Uganda shillings 250000 for citizens in East Africa Community member states.

On Uganda gorilla safari, you can also incorporate your gorilla trekking adventure with mountain gorilla habituation experience which is offered only in Bwindi Impenetrable National Park with habituation permits issued at $1500.

Visitors on gorilla trekking safari in Uganda can secure their gorilla permits for Bwindi Impenetrable National Park and Mgahinga Gorilla National Park through a reliable tour operator and for this case, AfriTrek Holidays is one of the best and recognized tour operators in Uganda you can get in touch not only to help you book your gorilla permit but also we go further plan a memorable gorilla safari holiday for you.

The other option is booking your permit through a reservation team at Uganda Wildlife Authority (UWA), an organ that is in charge wildlife conservation and protection in and outside protected areas of Uganda whose headquarter is based in Kampala.

The western gorilla (gorilla gorilla gorilla) is composed of the Cross River gorilla and western lowland gorilla, 2 sub-species that thrive mainly in Central African states like Equatorial Guinea, Cameroon, Central African Republic, Cameroon. Presently, the western lowland gorillas remain about 100000 to 200000. The Cross River gorillas are fewer than 300 in number and they exist in Nigeria and Cameroon.

Mountain gorillas are bigger with longer darker hair and shorter arms than the lowland gorillas. Their (mountain gorillas) bodies are made in such away that they adapted to their habitat. They range in mountainous areas with freezing temperatures.

Social life of both Mountain Gorillas and Lowland Gorillas

Mountain gorillas are known to emit a strong odor from their glands under the arms mostly when they are stressed and lowland gorillas studies indicate that their scent communication doesn’t play a big role considering their culture in the wild.

Generally, gorillas are intelligent creatures with impressive communication abilities displaying about 25 distinct sounds; they use tools like chimpanzees do to perform different tasks.

Generally, gorillas are herbivores however; the western lowland gorillas depend on vines, stems, leaves, roots and about 100 distinct kinds of fruits. Occasionally, they feed on insects and some small reptiles. The mountain gorillas feed strictly on plant material like shoots, stems, flowers, tree barks, and leaves.