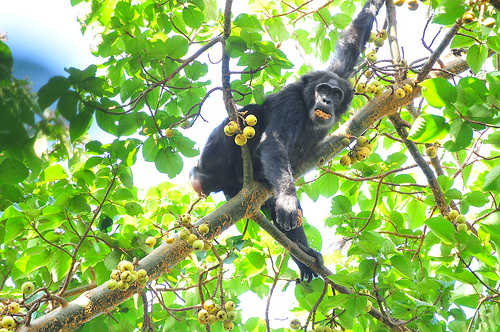 Where to go for Chimpanzee Tracking?

We all know Chimpanzees can be found in sanctuaries or zoos. But, we are referring to the natural habitats of human’s closest cousin. There are habituated chimps that can be tracked in the wild, giving you the real experience of wildlife. 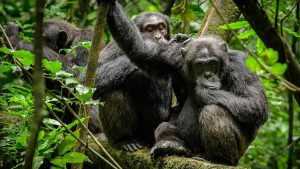 The “pearl of Africa” is undoubtedly the “Primates Capital of the World” with almost all kinds of primates you may think of.

Although Uganda has the biggest variety of primates, today, we will emphasize chimpanzees and their tracking spots. Some of the chimp tracking places are national parks, whereas others are sectors in national parks or forests.

Kibale forest is commonly referred to as the primates’ capital of the world with over 13 primates species, chimpanzees inclusive. Kibale Forest National Park is located in Western Uganda, protecting the moist evergreen rain forest.

The park was gazette in 1932 and formally established in 1993 to protect a large area of forest previously managed as a logged forest reserve. The forest boasts the biggest number of chimpanzees in the whole world, isn’t that amazing?

The biggest concentration of chimpanzees in Kibale national park has attracted a huge number of tourists and researchers who wish to track chimps and do chimpanzee habituation respectively.

The Chimpanzee Habituation Experience enables visitors to accompany researchers into the forest to less accustomed chimp groups. Chimpanzee tracking is, on the other hand, a visit to habituated chimpanzee groups.

Queen Elizabeth National Park is situated in the Western Region of Uganda, spanning the districts of Kasese, Kamwenge, Rubirizi, and Rukungiri. Queen Elizabeth Park is approximately 250 miles or 400 kilometers southwest of Kampala city by road.

Chimpanzees in Queen Elizabeth national park are found in the Kyambura gorge.
The gorge is best known for its resident chimpanzees. The chimps tracked in Kyambura gorge are habituated and ready for tracking with an escort of trained UWA guides.

Chimpanzee tracking in Kyambura gorge has much to offer, as you will spot other primates and different species of birds as you are trekking in the forest. The entrance to the gorge is also a pleasant spot for a picnic.

Murchison Falls National park is situated in the northern part of Albertine Rift Valley, spreading inland from the shores of Lake Albert, around the Victoria Nile, up to the Karuma Falls. It is the most popular and largest safari park in Uganda.

It is Budongo forest in the southwest of the Murchison falls conservation area that hosts human’s closest cousins, the chimpanzee. Budongo is astonishingly biodiverse with over 300 bird species, different mammals and hundreds of butterflies. There are over 800 chimpanzees in the forest accustomed to tracking. 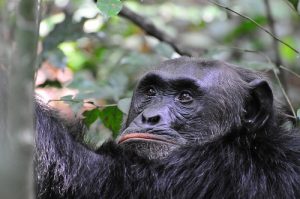 Ngamba Island is found on lake Victoria, 23km southeast of Entebbe. Ngamba Island is a Chimpanzee Sanctuary, or ‘Chimp Island’ that hosts over 40 orphaned or rescued chimpanzees that are unable to return to the wild.

The Island sits on 40 hectares where humans are confined on and chimpanzee lives freely in the rest of the forest on the island.

Visitors view the chimps on a raised platform during the two feeding sessions of chimpanzees when they leave the forest to a more open space for feeding.

Another prime tourist activity to do in Rwanda is Chimpanzee tracking. Rwanda has been better known for the gorilla trekking safaris and city tours. Chimp tracking in Rwanda is done in Nyungwe Forest.

Nyungwe Forest National Park was declared a forest reserve in 1933 by Germany colonial government and in 2004 was established as a national park.

The forest covers an area of approximately 970 km2 of rainforest, bamboo, grassland, and swamps. It is located in southwestern Rwanda, on the border with Burundi, touching along the boundary of Kibira National Park to the south, and Lake Kivu and DRC to the west.

Nyungwe forest is home to about 13 primate species and over 550 chimpanzees reside in the forest. There are two areas where chimps can trek in the Nyungwe forest and that is, Cyamudongo and Uwinka.

What you need to know about Chimpanzee Tracking.

10 Things You Should Know Before you Visit Rwanda